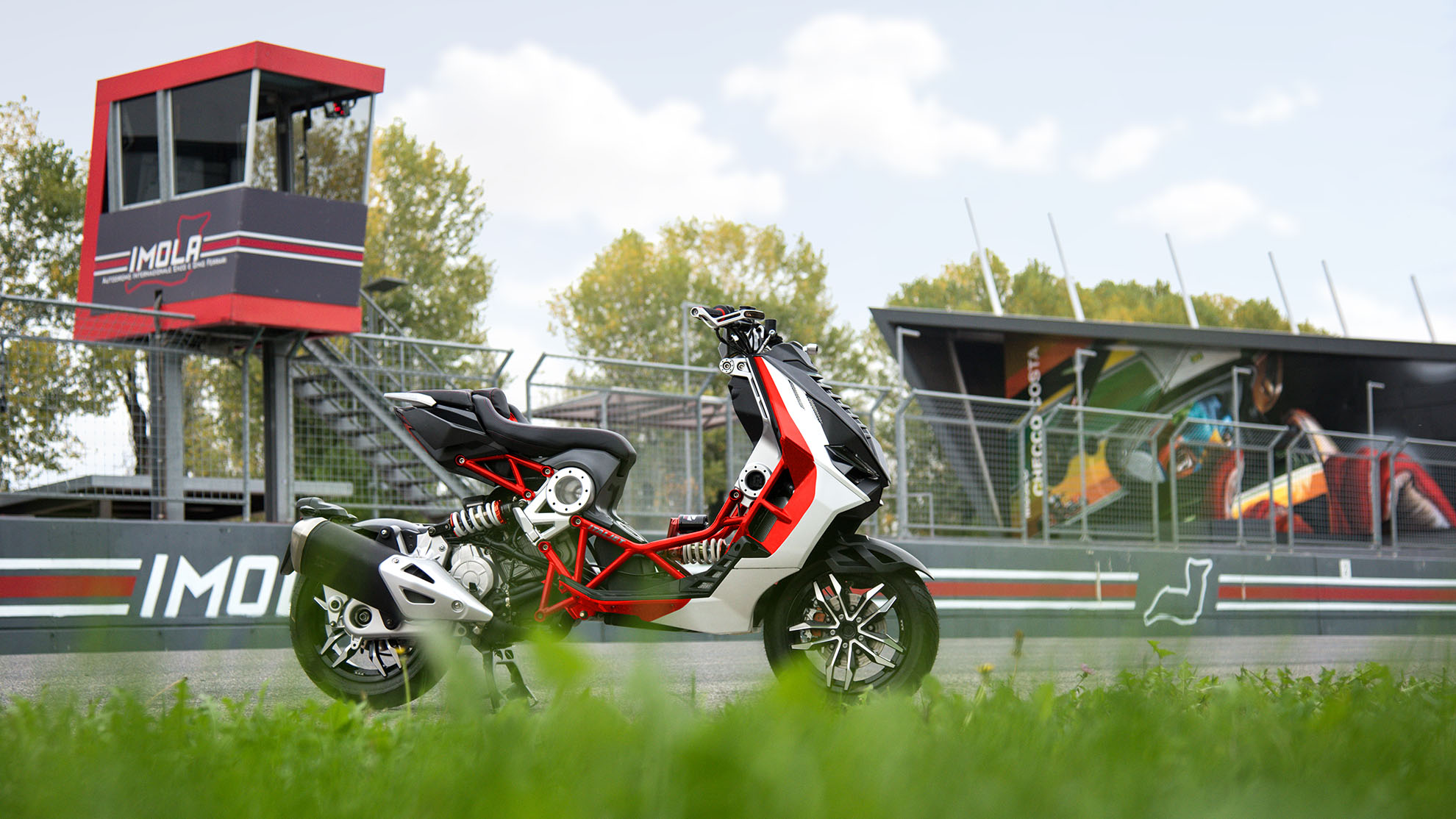 Italjet S.P.A. nominates the KSR Group as exclusive importer of the “Urban SuperBike” for Germany, Austria, France and Greece

Italjet Dragster – this name makes the pulse of sport scooter fans rise instantly. First presented in 1995, the revolutionary sports scooter with forkless front suspension turned the scooter world upside down. Over 70,000 vehicles of this model have been built.

In 2018 Italjet presented the prototype for the first time at the EICMA motorbike fair in Milan. After a slight delay due to the Covid19-pandemic, production will now start in autumn 2020.

To call the new dragster sports scooter is truly an understatement, and this is why Italjet proudly calls the new model, which will be available with 125 and 200 cc engine capacities, “Urban SuperBike”. Even though for the first time the Dragster remains in scooter-typical cubic capacity segments, it actually offers many features that are otherwise more likely to be found on Superbikes.

The whole vehicle is built on an impressively staged tubular frame, the power is brought to the road via Pirelli Angel tyres (120/70 R12 at the front, 140/60 R13 at the rear). Brembo brake callipers and the 175 and 240 mm brake discs ensure safe braking. The fuel injection system is supplied by another Italian manufacturer with top-level motorsport experience, namely Magneti Marelli.

Of course, the new Dragster again has a forkless front suspension, which is unique in this vehicle segment. Compared to the original Dragster, this has been further developed into an “Intelligent Steering System” or “I.S.S.” for short. Steering and suspension are thus completely independent of each other. This results in optimum and neutral braking behaviour without any immersion. Vibrations are also hardly transmitted to the handlebars.

The liquid-cooled single-cylinder four-stroke engine with 4 valves and double overhead camshaft (DOHC) of the 125 cm³ version reaches with 11 kW (15 PS) exactly the maximum power output allowed in the A1 class. The 200 cc version achieves 14.6 kW (20 PS).

The new Italjet Dragster is produced in a new factory in Castel Guelfo di Bologna in Emilia-Romagna and can therefore proudly bear the seal “Made in Italy”.

Italjet has selected and commissioned the KSR Group (www.ksr-group.com), based in Krems-Gedersdorf (Austria), for distribution in Germany, Austria, France and Greece. With over 80,000 vehicles per year, KSR is one of the largest motorbike distributors in Europe and is also active as a motorbike manufacturer itself. KSR products are currently sold in over 60 countries worldwide.

A special focus is on Italian brands with a long history. For many years KSR has been active as importer of Benelli in Germany, Austria and Switzerland. In 2017 KSR founded a joint venture with Innocenti SA, which has been producing classic Lambretta scooters again since 2018. In the same year KSR acquired the Malaguti brand and presented an extensive range of sporty light motorbikes and scooters at the EICMA. Italjet: the DNA of a passion

Italjet is one of the few Italian vehicle companies still owned by the founding family. The Tartarini family has been running the company since 1957 with the same enthusiasm, courage and passion that have made Italjet a trendsetting brand in the motorbike industry.

The company, based near Bologna, was founded by Leopoldo Tartarini, himself a famous motorbike racer of the 1950s, winner of the Milan-Taranto race in 1953 and three-time world record holder with the Cyclecar in Monza in 1969.

For Tartarini, motorbikes with a future-oriented character have always been the central theme of his life. But passion and ingenuity have always distinguished ITALJET as well. Over the course of more than 60 years, the company has produced more than 150 models, many of which have set sustainable trends. The final consecration as a reference for style and innovation took place in 1980, when the Museum of Modern Art (MoMA) in New York decided to exhibit an ITALJET Pack 2 as the only motorised two-wheeler in its permanent collection. In 1998, the Guggenheim Museum in New York exhibited the liquid-cooled scooter Italjet Formula 50 in the exhibition “The Art of the Motorcycle”, which was nominated “Scooter of the Year” several times in Germany, Spain and Italy.

After being very successful in Italy and North America, the Italjet Velocifero, the first scooter to perfectly combine classic 1960s style with modern technology, was named “Best Product of the Year” by the American magazine Business Week in 2000.

Italjet represents Italian excellence from its glorious past, where models have been produced in 48 countries.

News Impact of Covid on Italjet

News The Italjet Dragster is back

By clicking “Accept All Cookies”, you agree to the storing of cookies on your device to enhance site navigation, analyse site usage, and assist in our marketing efforts.